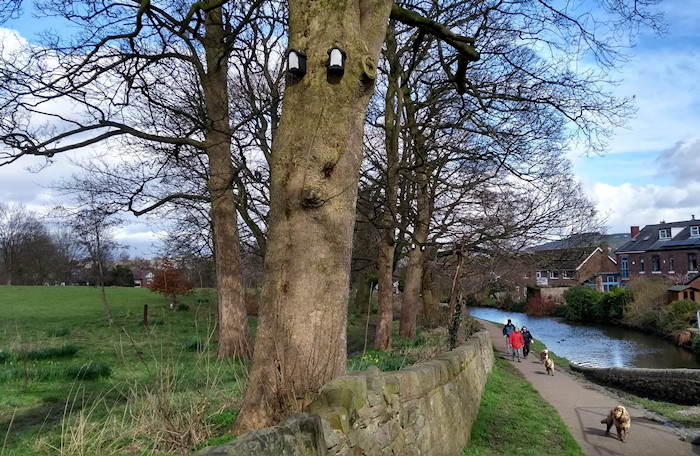 Not long after we were formed in 2003 Friends of the Park installed quite a lot of wooden bird and bat boxes around the park.

We noticed over the last few years that many of these had deteriorating badly, quite a few of the bird boxes had enlarged holes caused by Woodpeckers or Squirrels and several of both had fallen down.

In late 2019 we decided it was time to do something about this again and since December we've installed 18 new Woodcrete Bird Boxes and 8 Woodcrete Bat Boxes funded by our 50-50 Club and help from Stockport Hydro and Marple Senior Citizens. 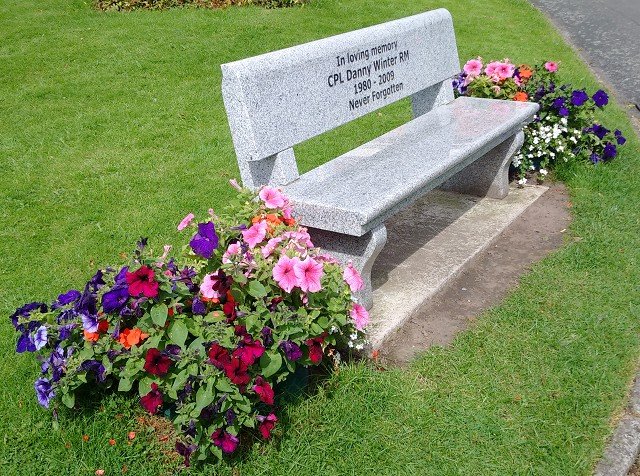 As explained in our first article about Danny Winter's Bench, we can't take any credit for its original installation in 2009 - that was all down to his family - but we do think it instantly became a key feature of the park and we've always felt it was very important to care for it as part of our task days as best we can.

Back in June 2016 we enhanced the scene with the addition of what have become known to us as "Danny's Pots", which we make a big effort to keep well planted and watered during our task days. More recently, in the summer of 2019, we arranged for the worn grass in front of the bench to be replaced by cobbled setts.

Did you know all 17 Town Centre Benches were refurbished by Friends of the Park? 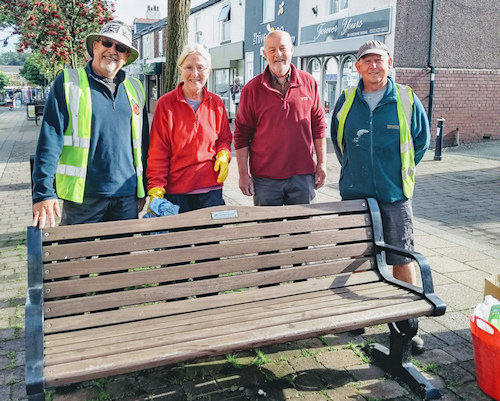 In 2013 we realised that we could utilise the skills we learnt in the park to refurbish the neglected benches in Marple Town Centre. By 2019 we had found sponsors for all 17 town centre benches and completed the last full refurbishment. Each refurbished bench has been fitted with a plaque acknowledging the sponsor and identifying that it was refurbished by Friends of the Park. The surplus income over expenditure boosted our skatepark project fund raising and helped with other projects in the park too.

It took two years of persuasion from when we first offered to venture outside of the park and refurbish the benches on Market Street, Derby Way and other areas of the Town Centre before the council allowed us to get started. The main obstacles of power-tools and risk assessment training were finally overcome and in August 2015 we were at last in a position to be able to do the work while covered by the council's insurance. 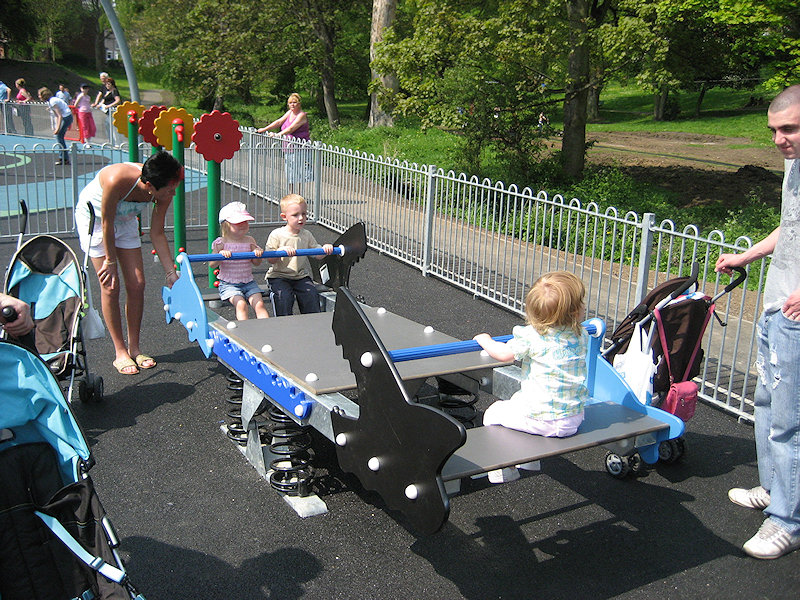 Following the great success of the 2018 Julian Wadden Treasure Hunt, which raised £2,154 towards new equipment in the Infants Play Area, and the award of a £1,000 grant from the Autotrader Community Fund, Friends of the Park are pleased to announce that a new Ocean See-Saw was installed next to the Infant Play Area swings in late September 2018.

It was initially proposed that the new equipment would replace the old springers but it turned out that the Ocean See-Saw would be a perfect fit in the space next to the new swings installed in 2017, so that's where has been installed and the springers will be kept for a future project that will replace them.

Proposals for a new sculpture trail

Inspired by the reaction to the loss of "Midnight" the Tree Sculpture in early 2019 Friends of the Park developed plans for a new sculpture trail to enhance the park and link up with trails on the canal and down at the Mellor Mill site. It was proposed that the trail would feature six sculptures inspired by local primary school children and a carved reading lectern near to the library in the same central spot that "Midnight" was once located. In early 2020 our first grant application was unsuccessful and the project is now on hold due to Covid19.