As part of the regular tasks carried out by Friends of the Park, one of the most important to us is the maintenance and improvement of the flowerbeds around the War Memorial. The beds have been vastly improved since since 2001, when the removal of huge conifers that had overgrown and obscured the war memorial kick-started improvements that continue today.

Since the council began making serious cuts in 2011, all maintenance is now carried out by the group and new plants and shrubs are mainly donated, funded by the local community or grown from seed by volunteers.

We decided that planting an ornamental "Red Rose Wall" hedge around rear edges of the beds would be a good way of continuing our improvements whilst also commemorating the approaching WWI Centenaries.

So in the spring of 2013 60 Red Rose Stromboli bushes were planted around the perimeter. 15 of these didn’t take and 20 replacement bushes were planted in November 2013. It was hoped these would eventually form a red rose hedge that would flower from June to November each year, hopefully looking like the small image above.

This project was the first in the borough to receive a Stockport Council “World War One” grant, covering the cost of the plants, compost and fertilizer. Cllr Iain Roberts presented us with a cheque for £200 in the park on 25 January 2014. 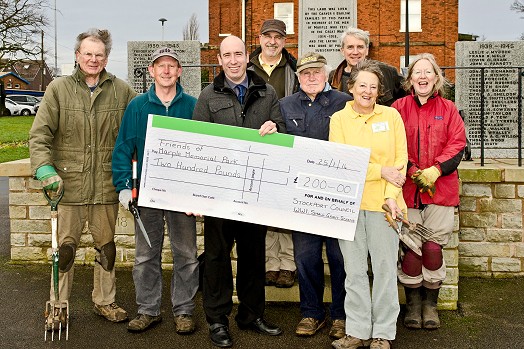 One of our few projects that hasn't worked out

We expected it to takes several years for the hedge to fully develop and the roses put on a promising display over the first two summers but then went into a rapid decline no matter what we did. We think they were too exposed and didn't take well to being trampled and urinated on by dogs and damaged by people walking through the beds. 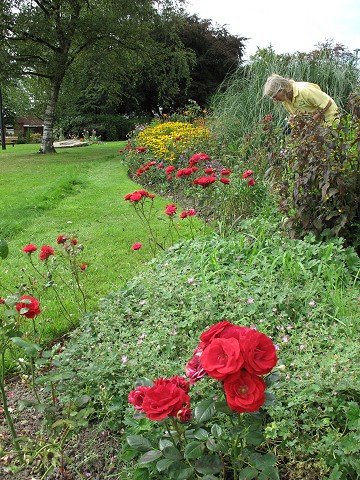 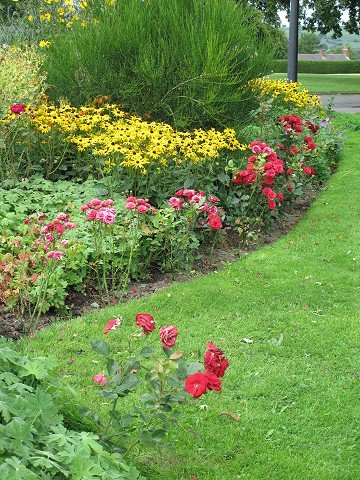 In more recent years we planted a new low hawthorn hedge around the beds instead and these have so far fared much better. They also seem to have protected the surviving roses and these appear to be doing a little better now but have never really lived up to our expectations. You can't win them all!