The Friends hold regular task days in the park on the last Saturday of each month in the winter and the middle and last Saturday from March to November. Everyone is welcome to join in for as long or as short they wish during the specified times. Please note that children and young people under 18 should be accompanied by a responsible adult. The next task day is:

TASK DAYS ARE CURRENTLY RESTRICTED AND AT THIS TIME WE ARE NOT RECRUITING NEW VOLUNTEERS. IF YOU ARE AN EXISTING VOLUNTEER PLEASE CHECK EMAILS FOR MORE INFO.

We like to keep a record of what we get up and here are details of past task days.

We were all over the place on our task day today!

Volunteers worked on the Jubilee Bed near the library, the main flowerbeds, the entrance to the park down by the cinema, the bandroom garden, on benches throughout the park and on the pavilion store. At one point we even had a volunteer clearing the drain in the car park and recovering three buckets of soil!

We are often told that the park looks better than it ever has and it's great to know that what we do is appreciated. Generous park users confirmed this by donating over £17 towards the upkeep of the park in our roving collection bucket.

Friends of the Park were delighted to be involved in the organisation of Open Gardens in Marple.

During the two days of the event we had an information point in the park, where we sold tickets, ran a raffle and talked to visitors about the open gardens and about our work in the park. It was a huge success and we were very pleased to play our part in raising an amazing £11,500 for Cancer Research UK! 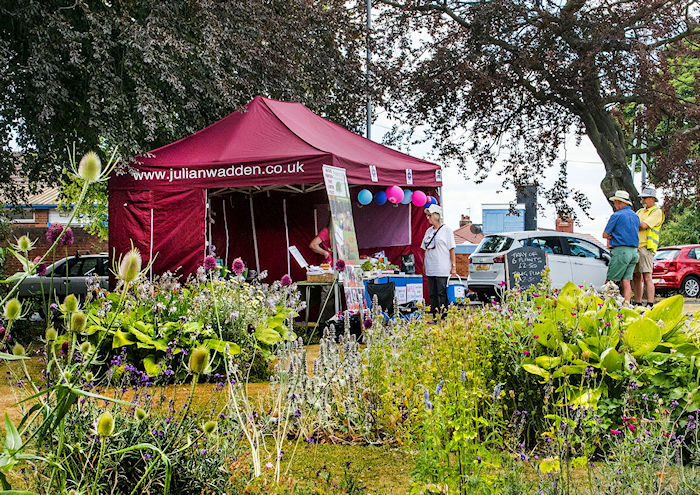 During Open Gardens we took the opportunity to have a dry-run on the installation of 141 knitted poppies on the war memorial railings. This is one poppy for every man on the memorial killed during WWI and will be repeated in November this year for the 100th anniversary of the end of the Great War. Didn't they look wonderful! 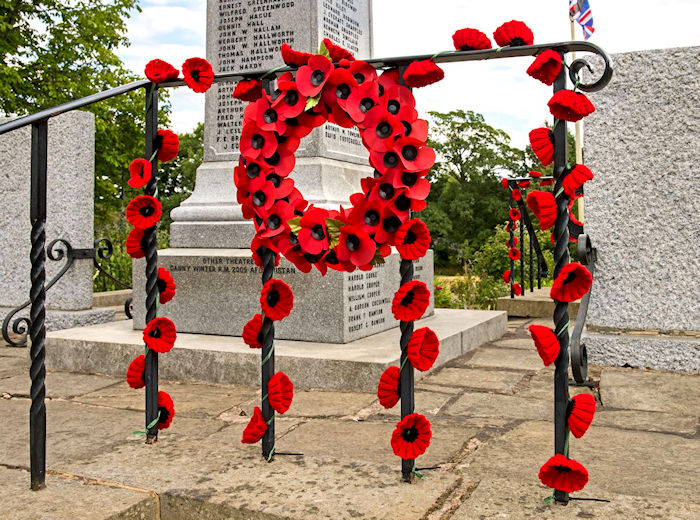 Today we compacted the French Boules Court using a Wacker-Plate from Wright Hire.

A big thank you to them for delivering and collecting the machine to the park for us and charging us a preferential rate for the hire. It was a hot and dusty task but it's now even better than when the contractor did it originally back in 2008. 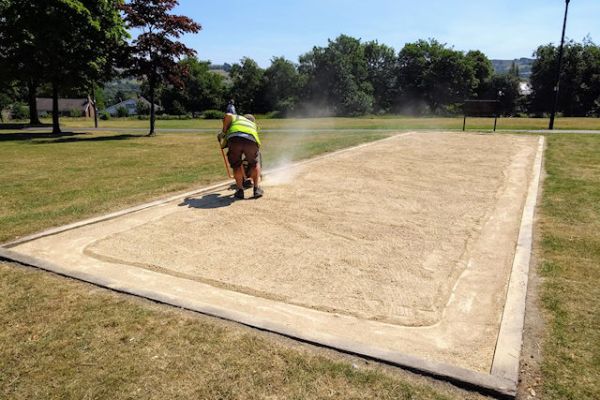 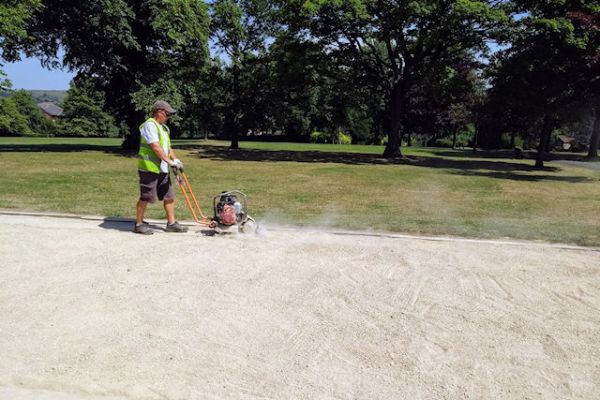 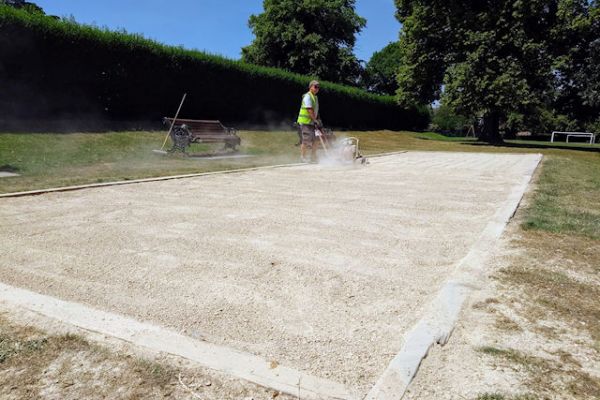 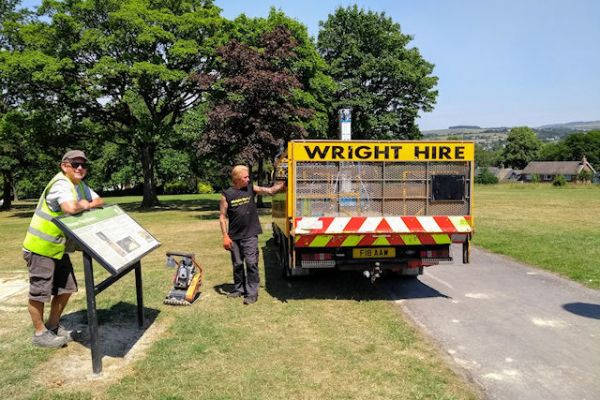 Today we had a special task day with Marple College.

Public Services students Gina and Sarah, plus their teacher Adam, joined us to spread 6 tonnes of material to top-up the French Boules Court that we originally constructed in 2008. It was a daunting task for just 6 people in today's heat but on average we shifted a tonne each in around one and a half hours. So a very big thank you to Gina, Sarah and Adam, and we wish the girls good luck in their Public Services careers, whatever they decide to do. 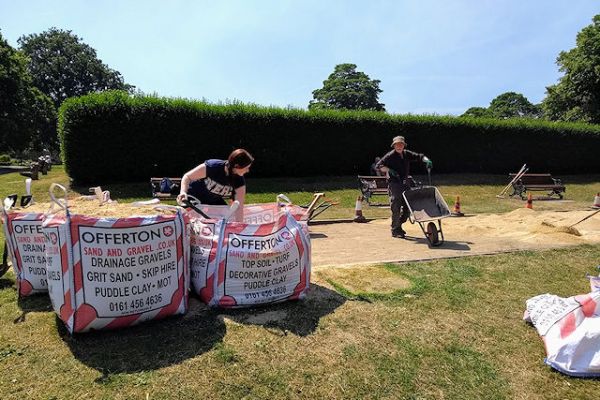 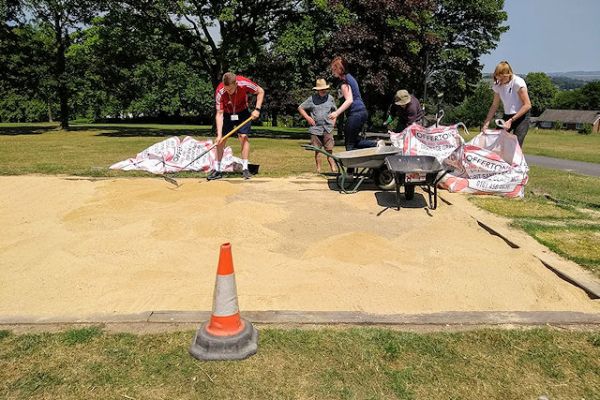 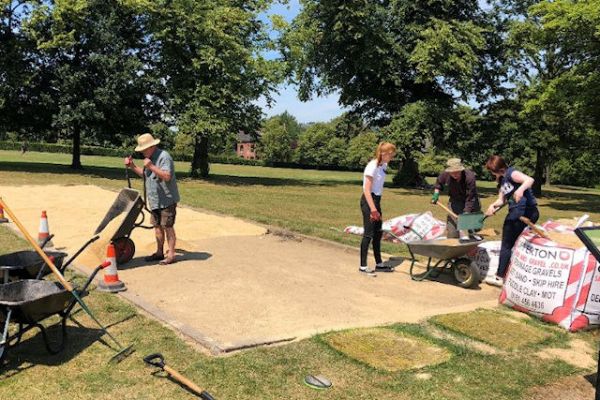 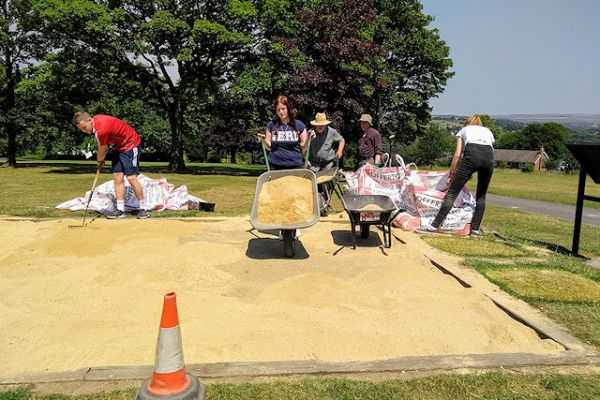 Today's Task Day was rescheduled from 16 June as it had clashed with the Carnival. Of course we were there and this year we were promoting Open Gardens in Marple and raising funds for Cancer Research UK by selling plants and tickets.

The big task today was distributing fresh new soil onto the main flowerbeds and the war memorial beds. The soil was provided by Stockport Council but was delivered much later than we had hoped, so it was quite a challenge to spread in the beds as they are so full of plants. Despite that our volunteers did really well and distributed all 4 tonnes we'd had delivered. Other work included strimming the grass in the Bandroom garden and treating benches throughout the park.

We've done a number of ad-hoc task days recently too, including regular watering of new plants because the weather has been so dry. Many of these are in the circular flowerbed, which this year is dedicated to 100 years since the Vote for Women. We've worked in partnership with local group Equality Matters Marple on the artwork for this and we're very pleased with the display.

We've also replanted the pots beside Corporal Danny Winter's bench recently. We feel that Danny's bench has become a really important feature in the park and we try very hard to keep the pots looking their best.

As well as the topsoil delivery we have also received 6 tonnes of material to top up the French Boules Court and we'll be doing that with the help of students from Marple College next week. 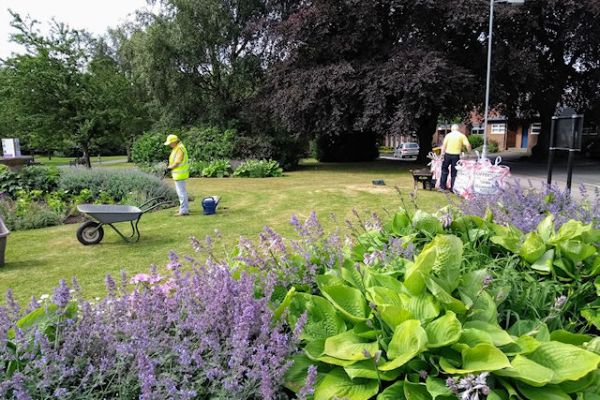 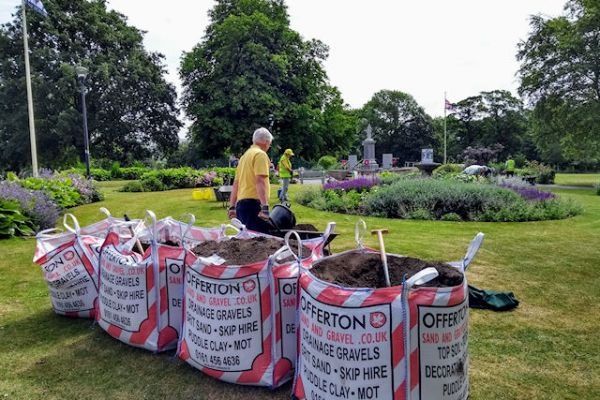 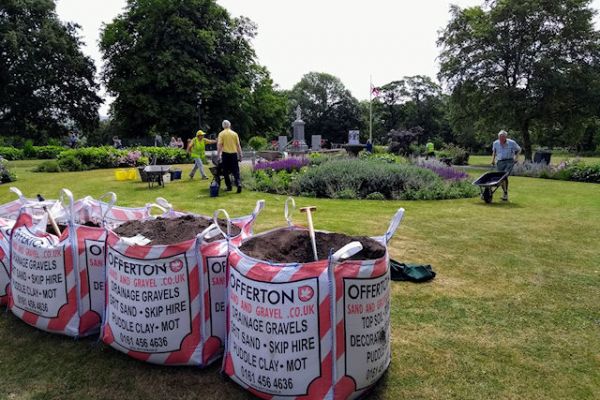 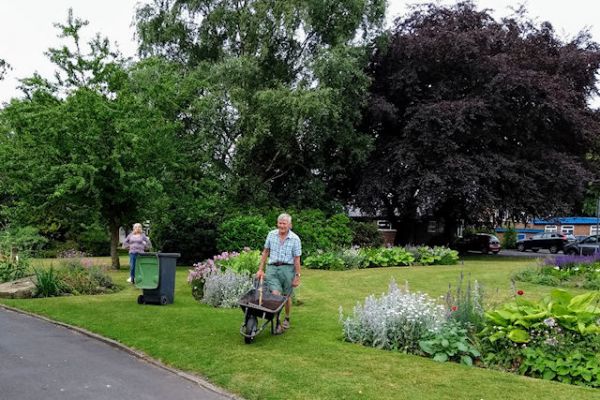 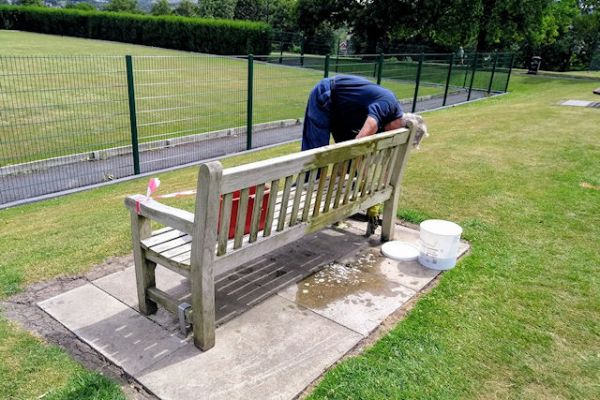 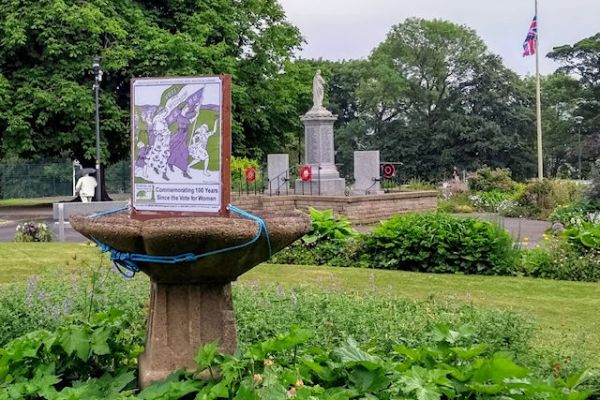 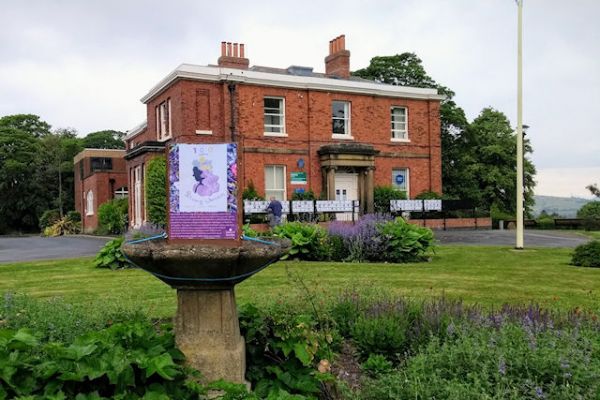 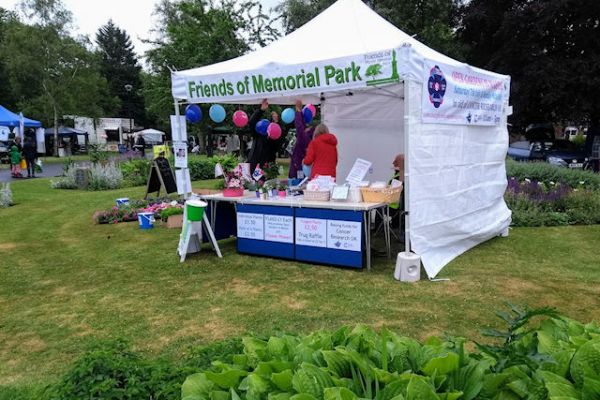 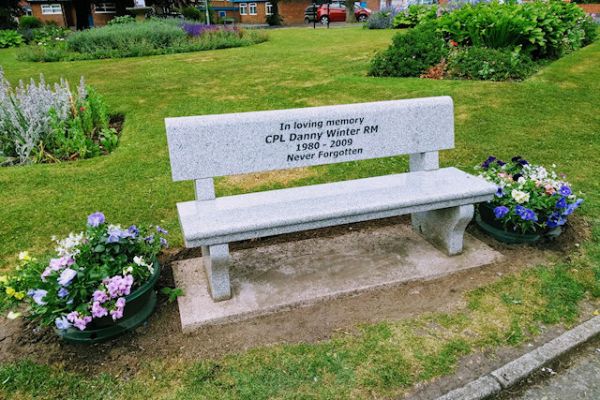 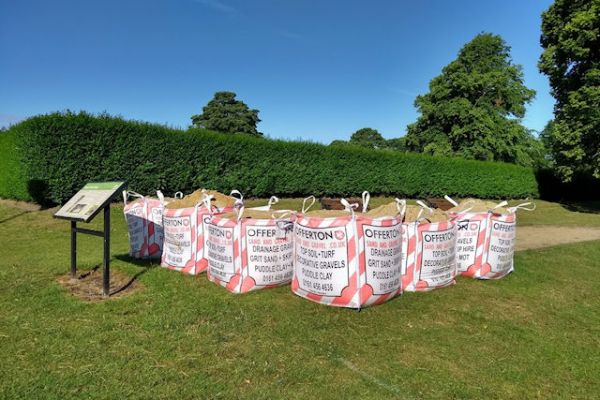 Thank you to park visitors, who showed support for our efforts by placing over £24 in our donation bucket!

Another busy task day from Friends of the Park, mostly working on the main flowerbeds and the Sensory Garden but also treating benches, installing paving slabs and strimming lawn and hedges at the Bandroom Garden.

The latter is the reason that there's a bit of a shortage of photos this time!

We've now installed slabs in front of all 3 Boules Court benches and we think it's made a huge improvement. Next up is the Skatepark benches.

The main Circle Bed is being prepared for the commemoration of 100 years of votes for women and we're hoping for a great display of green, purple and white in a few weeks time.

As well as looking after Marple Memorial Park, the group also takes care of the Lock 17 Flowerbed on Oldknow Gardens. As we're low on pictures this time we've included one from recent work there to fill the gap.

As usual park visitors kindly placed around £12 in our collection bucket, despite our A-Board material getting blown away in the wind whistling through the park.

Planting in the Sensory Garden. 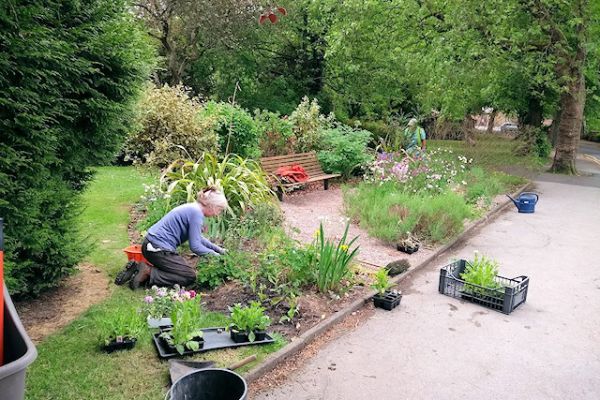 Planting in the Sensory Garden. 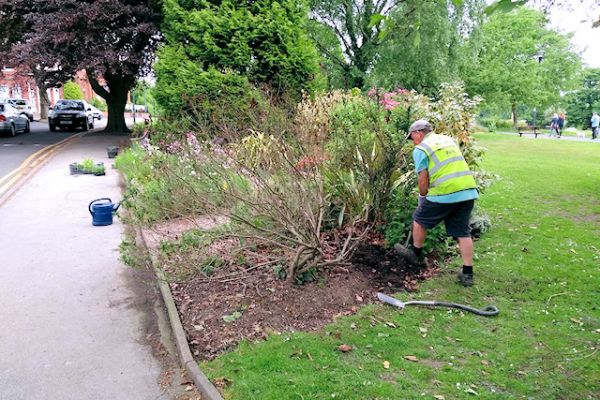 Circle bed being prepared for a commemoration. 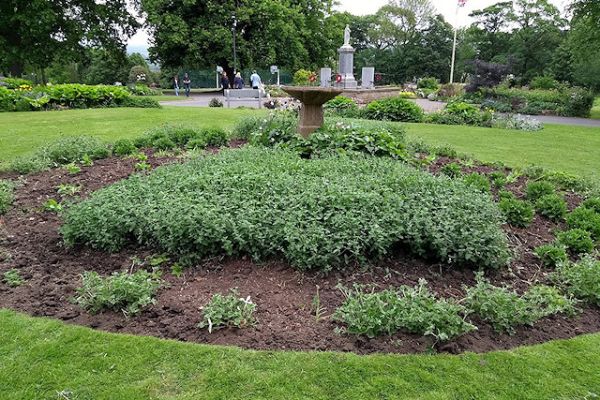 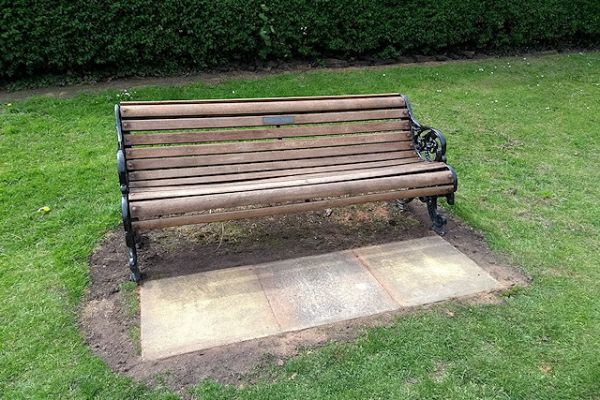 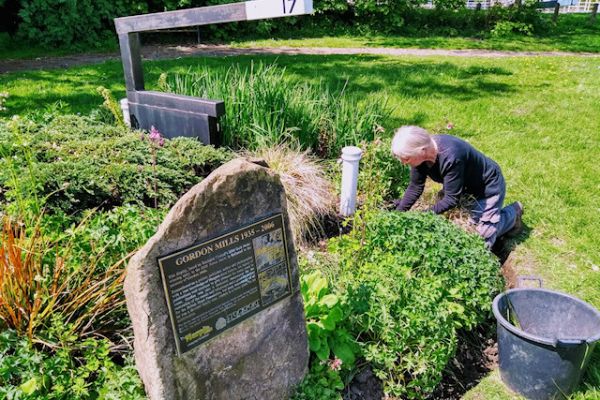